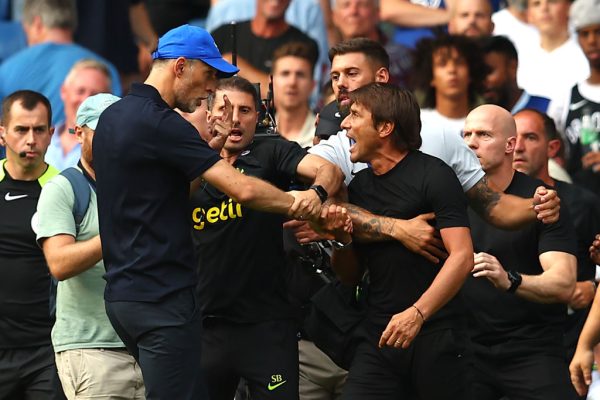 Thomas Tuchel and Antonio Conte clashed at the end of Chelsea vs Spurs (Photo: Getty)

Thomas Tuchel and Antonio Conte engaged in a fiery brawl at the conclusion of Chelsea’s 2-2 draw with Tottenham on Sunday.

The two managers had already clashed during the game when Pierre Emile Hojbjerg equalised for Tottenham much to the anger of Tuchel who believed Kai Havertz had been fouled in the build-up and that an offside Richarlison was obstructing goalkeeper Edouard Mendy.

They were each shown a yellow card for that incident but received reds after clashing again at the full-time whistle, just after Harry Kane had made the score 2-2 from a corner.

Again, Chelsea felt aggrieved as Cristian Romero’s foul on Marc Cucurella just moments prior had gone unnoticed by the referee.

As the full-time whistle went, the managers shook hands but Tuchel held onto his opposite number and engaged in a war of words, appearing to tell Conte, ‘look at me when shaking me hand’, before players and coaching staff jumped in to separate the pair.

As Conte made his way down the Stamford Bridge tunnel, he turned his heat to Chelsea captain Cesar Azpilicueta, but it was not clear what was said between the two.

‘I thought when we shake hands you looked in each other eyes, he had a different opinion,’ Tuchel told Sky Sports post-match but refused to elaborate too much on the matter.

The clash invoked memories of the Battle of the Bridge where Chelsea and Spurs players repeatedly clashed (Photo: Getty)

‘It was not necessary but a lot of things were not necessary. Come on guys, it’s between two competitors and nothing bad happened.’

‘It’s emotional, football. We don’t need to heat it up. You have emotional coaches on the touchline and that’s it.

‘There was a clear foul on Kai Havertz and the situation goes on and on. Richarlison was offside and when can you pull hair on a football field [referring to the Romero/Cucurella foul]?

‘We dominated for 90 minutes. We were sharp, we were hungry, it was a top performance. I’m sorry for all my players that we didn’t get the result we deserved.’

As for Conte, the Italian, who managed Chelsea from 2016-2018, flat out refused to talk about his clash with Tuchel: ‘My opinion is it’s better to talk about the game. It was a difficult game for both teams and we try in every game to be competitive.

‘Chelsea showed they are a really good team. Compared to last season we did better, but if we want to create problems for Chelsea [in the table] we have to be better.

‘I don’t want to comment on the [Tuchel] situation, this is not the most important thing. If there’s a problem, it’s between me and him.

‘It’s normal to come here and to suffer but at the same time we created chances to stay in the game.’