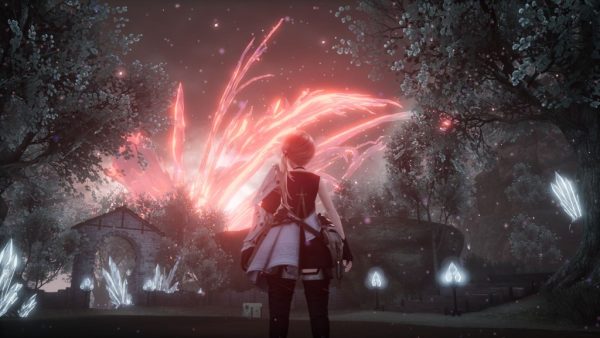 Harvestella – a story of seasons, you might say (pic: Square Enix)

Square Enix takes the Stardew Valley style farming sim and combines it with an action role-player where only gardening can save the world.

The last Nintendo Direct featured not one, not two, not three, but four separate farming games. There was Story Of Seasons: A Wonderful Life, which is a remake of the similarly subtitled Harvest Moon game from 2003; four-player indie title Fae Farm; Harvest Moon spin-off Rune Factory 3 Special and a tease of a new game (so technically that’s five farming sims); and, finally, Harvestella – a brand new franchise from Square Enix and seemingly the biggest budget game of the lot.

Harvestella had actually been unveiled in an earlier Mini-Direct, when it shared the limelight with Doraemon Story Of Seasons: Friends Of The Great Kingdom, so that is an awful lot of farming games all arriving at once. But while Harvest Moon (which had to change its name to Story Of Seasons for legal reasons) is the progenitor of the genre it’s indie game Stardew Valley which is responsible for the current wave of popularity.

Stardew Valley is a great game but it’s very low tech and doesn’t look much different from the original Harvest Moon games. Harvestella, though, is an attempt to marry the concept with a more modern style Japanese role-player, with a complex story involving time travel and the existence of a deadly new one-day season called Quietus.

Harvestella starts off like many a Japanese role-playing game, with your main character (who can be male, female, or non-binary) waking up with amnesia and no clue as to where they are, only for an angelic looking figure to tell them that they’re destined to save the world. You subsequently find yourself in exactly the sort of fairy tale village that farming games are always set in, although everyone’s upset about Quietus and what they refer to as Omens – one of who crash lands in a spaceship/meteor just as you arrive and turns out to be a human girl from the future.

All this happens within the first half hour and while there are plenty of cliches it’s not at all clear where it’s all going. Unless you already knew what kind of game this was, we don’t think anyone would guess that the first thing the mayor of the town suggests you do, after discussing the potential end of the world and the fact that your room-mate is a time traveller, is start tending a vegetable patch.

That is exactly what happens though, as the game segues into being a straight farming game with all the grace and subtlety of a motorway pile-up. The change of gears is bizarre, as all the low level farming stuff works exactly the same as in Stardew Valley et al., as you till the earth in neat little squares, plant seeds, water them, and then deposit them in a delivery box to be sold off in town.

Eventually you learn to start cooking and as you start building enclosures for animals (yours is purely a dairy farm, mind) your range of options begin to widen, especially once you start travelling into town and making use of their shops, while unlocking time-saving abilities by completing various challenges.

Although you have to keep your eye on your stamina, and eat or rest as appropriate, you’re also encouraged to explore the world map, to collect rare resources and navigate the game’s wider plot. This inevitably involves getting into fights, via Harvestella’s real-time battle system. Unfortunately, though, it pales in comparison to something like the Tales games or even the recent Star Ocean: The Divine Force.

There’s a system of elemental weaknesses you have to be aware of, and several different class/job types that you can switch between dynamically, but the action lacks any sense of weight or physicality. There’s also no block, which seems very limiting, as you have to just try and skirt out of the way or use the dash move that a few, but not all, of the classes have access to.

The boss battles are the best action element, in that they’re a little more complicated and require you to break the enemy’s guard in order to do any real damage, but it’s still pretty basic stuff. Exploring the dungeons is also kind of interesting, in that you can never do it all in one day, and so gradually explore and map out each one over a course of several days, a little like Etrian Odyssey.

Harvestella’s most successful elements are what Square Enix is best known for: It’s storytelling and its artwork. The game does often seem to struggle running on a Switch, though, and while there are some impressively fantastical vistas to explore the visuals are inconsistent, with everything around your farm looking a lot more basic.

The story’s main theme is that of the circle of life and accepting the inevitable, which at times can be just as melancholic as it sounds. Your time-travelling pal Aria is by far the most interesting of the characters and while we wouldn’t necessarily advise playing the game for the story it’s certainly better at encouraging you to persevere than the combat or farming.

In terms of gameplay, Harvestella is a better farming sim than it is an action role-player but it’s still not very good at either. The concept itself invites such failure, with the farming element being so generic it almost feels copied and pasted in from another game. The idea of mixing it with an action role-player isn’t even original – that’s basically what Rune Factory is – and yet still the combat feels limp and uninteresting.

If Harvestella follows the same path of most farming games, it’ll end up with half a dozen sequels before you know it. We’d be quite interested in playing Harvestella 3, or whatever, but this initial attempt feels poorly thought out and an awkward compromise in almost all respects. Still, there’s clearly plenty of potential to be farmed here, and we hope its next harvest brings with it a more refined flavour.

In Short: Mixing Final Fantasy with Harvest Moon feels like it should result in something more stimulating than this awkward mishmash, whose disparate elements all prove disappointingly underdeveloped.

Pros: The concept has plenty of potential and the art design and music is often very good. Some interesting story elements and characters.

Cons: The combat is poor and the farming element very generic. Beyond the story, the role-playing playing elements are equally underwhelming. Some performance issues.


MORE : Star Ocean: The Divine Force review – boldly going where many JRPGs have gone before


MORE : God Of War Ragnarök review – a myth of father and son

To submit Inbox letters and Reader’s Features more easily, without the need to send an email, just use our Submit Stuff page here.

For more stories like this, check our Gaming page.