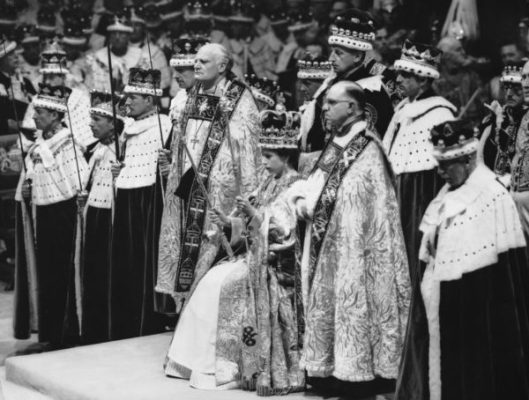 It’s been revealed that, in the not-too-distant future, we’ll see the coronation of King Charles III take place.

Now confirmed to be taking place on Saturday, May 6, 2023, the historic event of national significance will be broadcast around the world, and likely to be viewed by hundreds of millions of people.

However, a royal source has claimed that the coronation will be ‘less expensive’ than the Queen’s amid the cost of living crisis.

‘The King is very aware of the struggles felt by modern Britons,’ says the source, ‘so will see his wishes carried through that although his coronation ceremony should stay right and true to the long held traditions of the past, it should also be representative of a monarchy in a modern world.’

Indeed, a lot has changed since the King’s mother, Queen Elizabeth II, was crowned in 1953.

But just how much did Her Majesty’s coronation cost?

How much did The Queen’s coronation cost?

The Queen after being crowned at Westminster Abbey (Picture: Topical Press Agency/Getty Images)

That’s around £46 million in today’s money.

The coronation took place at Westminster Abbey – where The Queen married Prince Philip several years earlier in 1947, and would eventually be given a state funeral.

Though a coronation had happened just 16 years earlier, for the Queen’s father King George VI, Elizabeth’s was particularly special, as it was the first coronation to ever be televised.

Secrets of King Charles’s slimmed down coronation ‘revealed’
One of last coins featuring the Queen released to mark 100 years of the BBC
Netflix sparks outrage as The Crown plans to show Prince Philip ‘pursuing affair’ weeks after Queen’s death
Where is Queen Elizabeth II’s final resting place and can you visit?
Charles III should be the last monarch – it’s time Britain had an elected head of state

Head to Metro.co.uk‘s Queen Elizabeth II tag page for the latest updates, and sign Metro.co.uk‘s book of condolence to Her Majesty here.

The three-hour ceremony was witnessed by 8,251 guests in person at the Abbey – including representatives for 129 countries – but watched by around 27 million in the UK on TV, out of a population of 36 million at the time, according to the Royal Family website.

The Queen leaving her coronation in 1953, in the Gold State Coach (Picture: Getty)

Soldier, 18, who walked alongside Queen’s coffin found dead at barracks

The coronation was organised by The 16th Duke of Norfolk, and the service held by the Archbishop of Canterbury.

A grand affair, the 260-year-old Gold State Coach was used to transport the Queen to and from the Abbey, with some of the coronation’s cost reportedly devoted to repairs.

Much work was done to the Abbey to prepare in early 1953, according to its official website.

It notes ‘a 200-strong labour force… began building the ‘theatre’ (where the throne for the Homage is placed) under the lantern, tiered seating for 8,251 guests in the transepts and nave, the Royal Gallery, staircases, and the annexe outside the west entrance’.

Several crowns, that have been used for centuries, were also involved in the coronation.

St Edward’s Crown, which is used at the monarch’s coronation (Picture: JACK HILL/POOL/AFP via Getty Images)

Her Majesty wore the George VI State Diadem, a crown from 1820 encrusted with 1,333 diamonds and 169 pearls, on her way to the Abbey – but would be crowned with St Edward’s Crown.

The Queen’s coronation was the last time it was worn, and it won’t be worn again until King Charles III is crowned.

Her Majesty wore the slightly-less-heavy Imperial State Crown as she travelled back to Buckingham Palace from the Abbey, where she was greeted by crowds along The Mall.

Made with over 2000 precious stones – including 273 pearls, 17 sapphires, 11 emeralds and 5 rubies – the Imperial State Crown has four of particular note: the Cullinan II diamond, St Edward’s Sapphire, the Black Prince’s Ruby, and the Stuart Sapphire

Also involved in the Queen’s coronation was the placement of the Coronation Ring, as well as the Orb and Sceptre.

Dress-wise, Her Majesty wore a white satin gown by British designed Norman Hartnell to her coronation, which featured embroidered emblems representing flowers from the UK and Commonwealth realms.

Ceremonial robes were also used in the coronation. Her Majesty was cloaked in the linen Colobium Sindonis, a cloth/gold robe called Dalmatic or Supertunica, and the Robe Royal.

The Queen was also crowned in St Edward’s Chair, which dates back to 1301. It is traditionally used for coronations and is permanently kept at Westminster Abbey.


MORE : The Queen’s Coronation day: the start of a glorious reign


MORE : Will the Queen’s crowns have to be resized to fit King Charles III?

EastEnders Spoilers: Kat Slater Stunned As She Finds Out Alfie Moon Is Getting Married – but to Who?