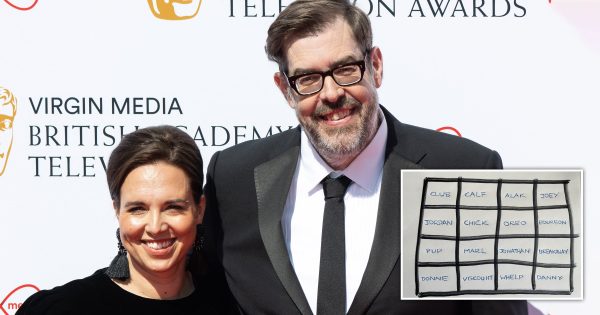 Get yourself a man who makes you gameshows IRL (Picture: Getty/Twitter @ingridoliver100)

We’ve come to know and love Richard Osman as the gameshow king and it seems he loves them so much, he created one for his girlfriend IRL.

Fans were crushed when the Pointless star announced that he would be stepping down from the iconic show back in April.

But after 13 years on the BBC programme, it won’t be easy to shake his love of gameshows, so much so that he’s even taking it home with him.

Proving himself to be a lover of Only Connect – first broadcast in 2008 and hosted by Victoria Coren Mitchell – the author put together his own unique board for partner Ingrid Oliver to complete.

Honestly, Friday nights sound like a right hoot round theirs, can we join in?

Ingrid took to her Twitter page to share her boyfriend’s creation, writing: ‘So @richardosman made me an Only Connect wall and I am sharing it here for your quizzing pleasure.’

So @richardosman made me an Only Connect wall ð¤ and I am sharing it here for your quizzing pleasure. pic.twitter.com/26soRNK5B1

Naturally, fans were all up in the replies trying to figure out the correct answer, with the aim of the game being that a team is given a wall of 16 clues and they must work out the solution – which will be four groups of four connected items.

Even presenter Victoria – who is married to comedian David Mitchell – was a fan of Richard’s game, joking: ‘I love everything about this. It’s also complicated by the fact that when I was about 7 I had a crush on a boy called Jonathan Marl.’

Totally here for Richard’s masterpiece, one follower wrote: ‘No greater love hath a man for a woman than to send her an Only Connect wall. Now don’t let me hear any of you muttering that romance is dead.’

We know and love Richard for his work on BBC’s Pointless (Picture: PA)

Others branded it ‘top quizzing’ and thanked the TV star for filling the Only Connect void in their lives since the previous series ended.

So… want the answers?

Being the woman of the people she is, Ingrid shared the solutions later that night, revealing that Jordan, Jonathan, Donnie, and Dannie were all names from New Kids on the Block.

Meanwhile, Viscount, Club, Breakaway, and Bourbon were all names of chocolate biscuits, and joey, pup, whelp, and chick were all young animals.

Despite leaving some Twitter users well and truly stumped, plenty got it right, earning praise from Ingrid herself.

‘Well done if you got it. Particularly impressed with the New Kids on the Block knowledge out there’, she tweeted.

Richard – who has been in a relationship with British actress Ingrid since December 2021 – appeared in his final episode of Pointless alongside Alexander Armstrong at the end of July.

He delivered a heartfelt message to his longtime co-star as he bid an emotional farewell, revealing that a new presenter will take his place in September.


MORE : Steps star Claire Richards still worries about what people think of her