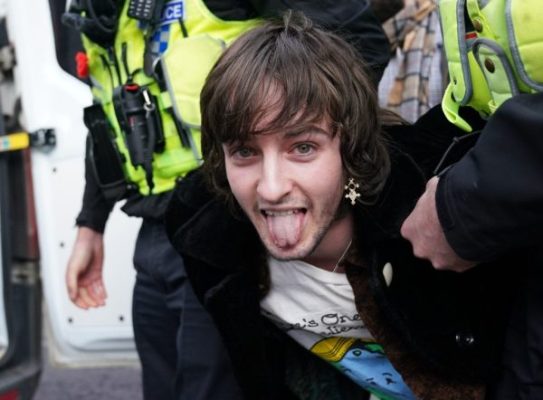 Patrick Thelwell was told he will be ‘watching his back for the rest of his life’ (Picture: PA)

The student arrested for chucking eggs at King Charles claims he’s had death threats, with one person telling him he is going to be beheaded.

Patrick Thelwell, 23, revealed the extent of the backlash he has received since being bailed over the incident during a royal walkabout in Micklegate Bar, York, on Wednesday.

He told Metro.co.uk: ‘It’s been a whirlwind, my life is now divided into pre and post egg.

‘I have received messages of support from people around the world – even people in Iran. But I’ve had a lot of death threats.’

The former Green party candidate and Extinction Rebellion member described those making them as ‘bootlickers’ and said some had even turned up at his home.

He went on: ‘I’ve had people threaten to decapitate me, people have been saying I’ll need to watch my back for the rest of my life.

‘And then their messages usually end with “God Save the King”.

The former Green Party candidate has been arrested at least five times before (Picture: Facebook)

‘People have also been round to my university accommodation, and round to my previous addresses.’

If charged and found guilty, Thelwell could face a fine of up to £5,000 and up to six months in prison.

He is currently under investigation by the University of York for ‘bringing their reputation into disrepute’ and faces expulsion.

However, the International Relations student is not too concerned, saying he has ‘no regrets at all’, especially as this is the fifth time he has been arrested.

The GoFundMe to cover Thelwell’s legal fees has been taken down (Picture: Tim Rooke/Shutterstock)

In September 2020, he was found guilty of blocking London Bridge as part of Extinction Rebellion (XR), for which he was fined £500.

He has also been ‘violently’ evicted by police after squatting in two separate locations in York to set up ‘radical’ libraries.

Thelwell said: ‘I am feeling good, I am just focused on getting my message out there. I haven’t taken action about the Royal Family before.

Thelwell protesting outside the University of York, which has threatened to expel him (Picture: Facebook)

Asked if he had planned the egg-throwing attack as soon as he heard the King and Queen were coming to visit, Thelwell responded: ‘Well I’m always thinking of fun things that can be done.

‘I don’t think the Royal Family should assume that everyone will be happy to see them. I think they are all complicit in the systemic human rights abuses of the state because they benefit from their bloodline.’

Unfortunately for Thelwell, his GoFundMe to cover legal costs has been taken down by the website.

‘My GoFundMe did get taken down, and they haven’t said why – the King was probably on the phone,’ he said.

‘We were past £500, but I also heard that they raise your fine if you fundraise the money anyway.’

NHS Forking Out £2,500 a Shift to Agency Nurses to Stop Staffing Crisis